Money talks with my nephews 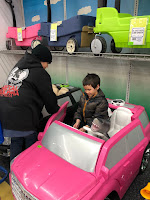 One evening when my nephews were over to visit, we were watching a movie and suddenly the oldest boy whispers something to his little brother and they run upstairs to my guest room.

Several minutes later, they come back down and sit side by side on the oversized ottoman I have in the bay window.

"What did you break?" I ask. The kids have never broken anything in all their years staying over so I'm not too concerned.

" It's nothing bad," says his little brother. "He doesn't really know how to ask."

Nephew #1 looks like he is about to puke.
" You know how we saw those toys we really liked at the mall?"

Silence follows. Nephew #2 is sitting on his hands, glancing at his brother.

Nephew #2 decides to step in to give his brother a break.

"We were thinking that instead of buying us something next time we come to visit, you could buy us that toy now." 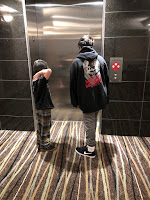 My inner reaction was laughter, I thought something serious had happened.

Being an aunt, I could totally run back to the mall and buy them whatever.
However, I had already let them each get a new toy and we had gone to the wave pool two days in a row and I bought them an app to make videos.
I took a moment to think before speaking.

“It’s not that I don’t want you to have that toy,” I said.
“ I’m pretty sure you will get it. The thing is, I have to pay a lot of money at the end of the month for this nice place I live in.”

“ Are you guys OK with that?” I asked

We then returned to watching the movie.

I don’t like saying “No” to them.
Because kids hear rejection all the time. My nephews know that I don’t buy them everything they want either.

They get to choose something they feel excited about. This wasn’t the first time my oldest nephew has tried to negotiate extra stuff.

The older they get, the more they will try, I’m sure.

What occurred to me at that moment was I needed to remind them that I have financial obligations that are important.
They had no problem with me choosing to pay my rent over a toy.

I make an effort to speak in positive terms about money, most days.

It’s not about pretending I have more money than I actually do.

For me, it’s about using money to take care of my basic needs in a manner that suits me. I don’t complain about the bills because I enjoy everything I have.

I’d much rather be seen as responsible than frivolous in the eyes of my nephews. They have asked me how much it costs to have a car and how much I have to pay to live where I do.
And I tell them.

They know when they come to visit, they get to pick out their own food, we go to the mall, we go swimming and rent movies.

It’s important to me that they enjoy coming to visit.
It’s also important to my brother that his kids get out of the house from time to time.

Email ThisBlogThis!Share to TwitterShare to FacebookShare to Pinterest
Labels: money