Lessons from famous people Part 1 of 1678 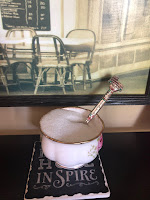 Sugar is my #1 vice and celebrity gossip is my 2nd.

Each morning I wake up and check my various trusted gossip news sites to see who is getting divorced, who has died and what Meghan Markle, Duchess of Sussex wore to Wimbledon this weekend.

(Side note, when I discuss a celebrity, it's not important that you know who they are. You will still understand the point of my story.)

I've been spending time out at a lake cabin where there is no internet, so I have to wait until the evening when Entertainment Tonight comes on to get my news.

Everything has a downside.

Growing up without a TV- for religious reasons-I was not exposed to much in the way of pop culture.  However, I did have a mother who loved to read autobiographies and she would feed me random pieces of information about random famous people.

I was 12 when I started to read People Magazine at the local library and that snowballed into watching TV at my friend's house and sneaking out to see movies.

Eventually, highspeed internet was invented and I found a website dedicated to reporting on the daily lives of famous people.


Now, I have the TMZ app on my phone for up-to-the-minute breaking news. Oh, how I would have died for that back in 1998.


I'm going to blame this celebrity fascination on my mother.

As much as I love my celeb gossip crap, I didn't want to make this a BREAKING NEWS site. That's not to say I won't discuss current events but I want to go a little deeper with it.

I can sit for hours, scrolling through the various gossip sites I like, reading the same information over and over again. After a while, it's like eating a bag of potato chips. The first handful tastes amazing but then halfway through the bag, nausea sets in and it's time to eat a good steak dinner.

Or drink a giant glass of water.

I started watching this show called Letterkenny.  A Canadian comedy, brilliantly written about a small town in Ontario and the problems of its 5000 citizens.

I'm more of a Scandal and Suits kinda girl but this show caught my attention and I became obsessed to the point where my brother and I now send each other daily text messages using Letterkenny quotes.


It has to be the most quotable show ever in the history of TV.  It's on Cravetv here in Canada, on Hulu in the U.S.

When something captures my attention, I do what any normal person does.

Tall, a proud Canadian boy, cute as hell. He's younger than I am and has made something that has captured the hearts of his fellow countrypersons.

Ok, I'm just going to say countrymen because I like the flow of that word and I use it in an all-encompassing context.

He has created something that has captured the hearts of his fellow countrymen.
(Would I have to replace fellow ?? I can't keep up with all this PC stuff.)

This is exactly the type of thing that Wayne and Daryl and Squirrely Dan would discuss while sitting on the front porch, smoking a dart.

Jared is an actor who found success in Canada, went to Hollywood, did not have any luck so he came back to Canada and realized the kind of person he wanted to be and then went on to create a hit show that has fans worldwide.

Of course, I was really trying to find out his marital status but he's not a big enough name for TMZ to stalk, so I settled for a handful of newspaper articles and some interviews posted on Youtube.

He talked about pursuing his love for acting, despite the sideways glances people would give him.

Telling people that you are pursuing anything other than a typical 9-5, well it generates the same look I give to people when they tell me they are having a baby.

But dammit, I was inspired.

Inspired by his persistence, by his effort to pull himself up after failure and to get clear on the kind of person he wanted to be.

And inspired by the fact that even though it's about hicks and skids and hockey players and I'm very much a big city girl, I fucking adore this show and its quirky characters.

It's my dream, it's always been my dream even before I knew how to put it into words, to create something that resonates with people.

Movie stars and musicians do it all the time.

Someone, who has no idea who you are, made something that enhances your life.


Makes you send ridiculous random quotes to your siblings........

And for a moment, while you experience said piece of art, you feel connected and at ease.

It's enough to keep going, one foot in front of the other.

Or as Wayne would say, "Pitter patter, let's get at'er. "