Won’t you save me San Francisco Part 2 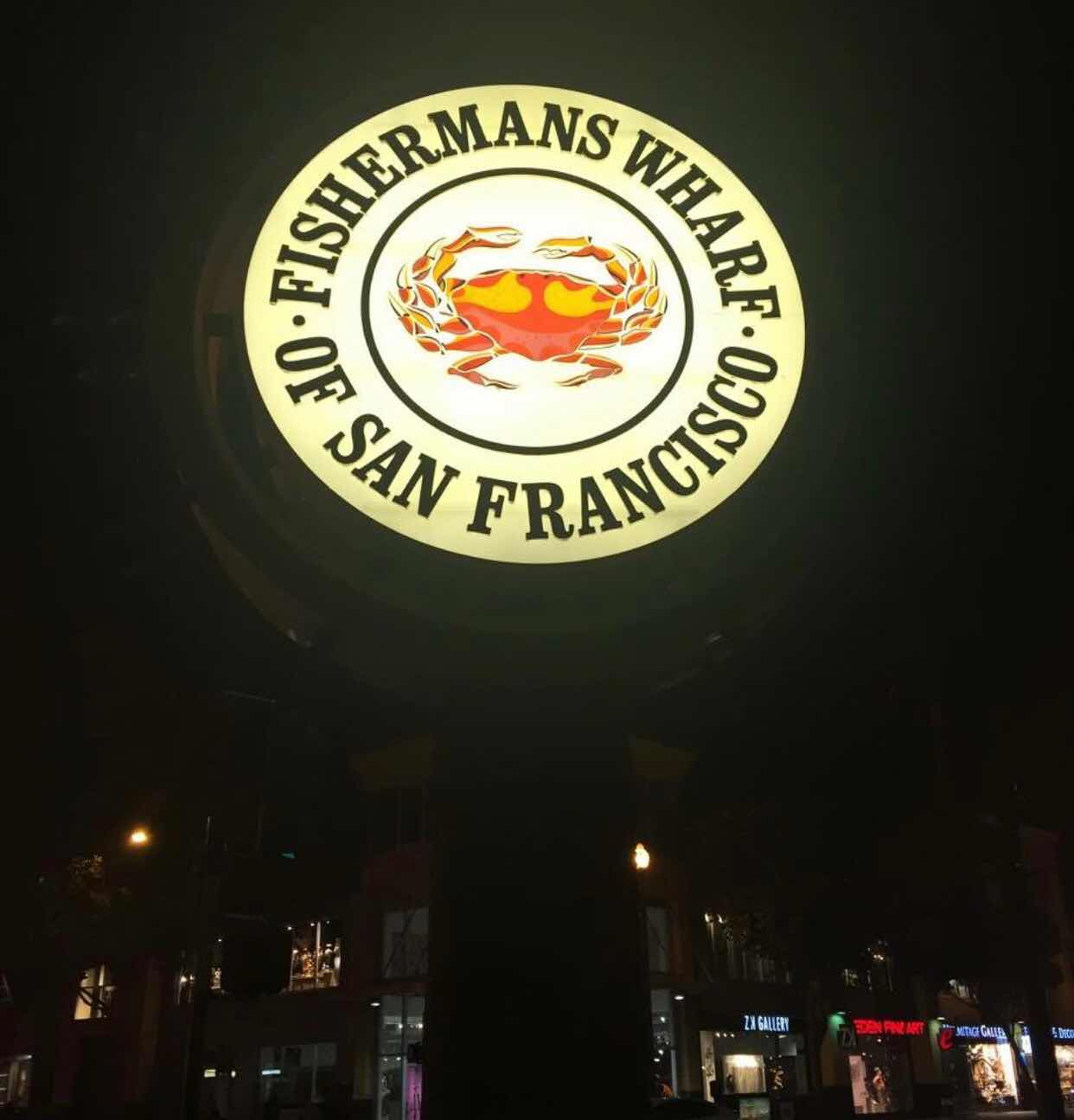 Picking up from where I left off yesterday in Part 1...

I arrived at my hotel in Union Square and discovered that I had been upgraded to a business suite.

With a free stocked minibar.

I unpacked my luggage, changed out of my “flying” dress, checked out the view from my suite and ordered some extra pillows from the pillow menu.

Then I went out to catch the cable car which stopped right in front of my hotel.

On the corner, a man asked me if I had any spare change. I told him I only had a Canadian loonie, which was true.

He declined.  It was worth about 25 cents, American. 😁

I did have US cash but no small bills.

The cable car was rockin’, standing room only. I squeezed into the center as I wasn’t prepared to dangle out the side from the stripper pole.

When a bench seat became available, I sat down and hung on to the wires beside me, still clutching my fare.

We blocked traffic at each intersection as people hopped on and off.

The conductor finally collected my $7 and issued my pass.

The ride ended at Ghirardelli Square and I hopped off to explore Fisherman’s Wharf. 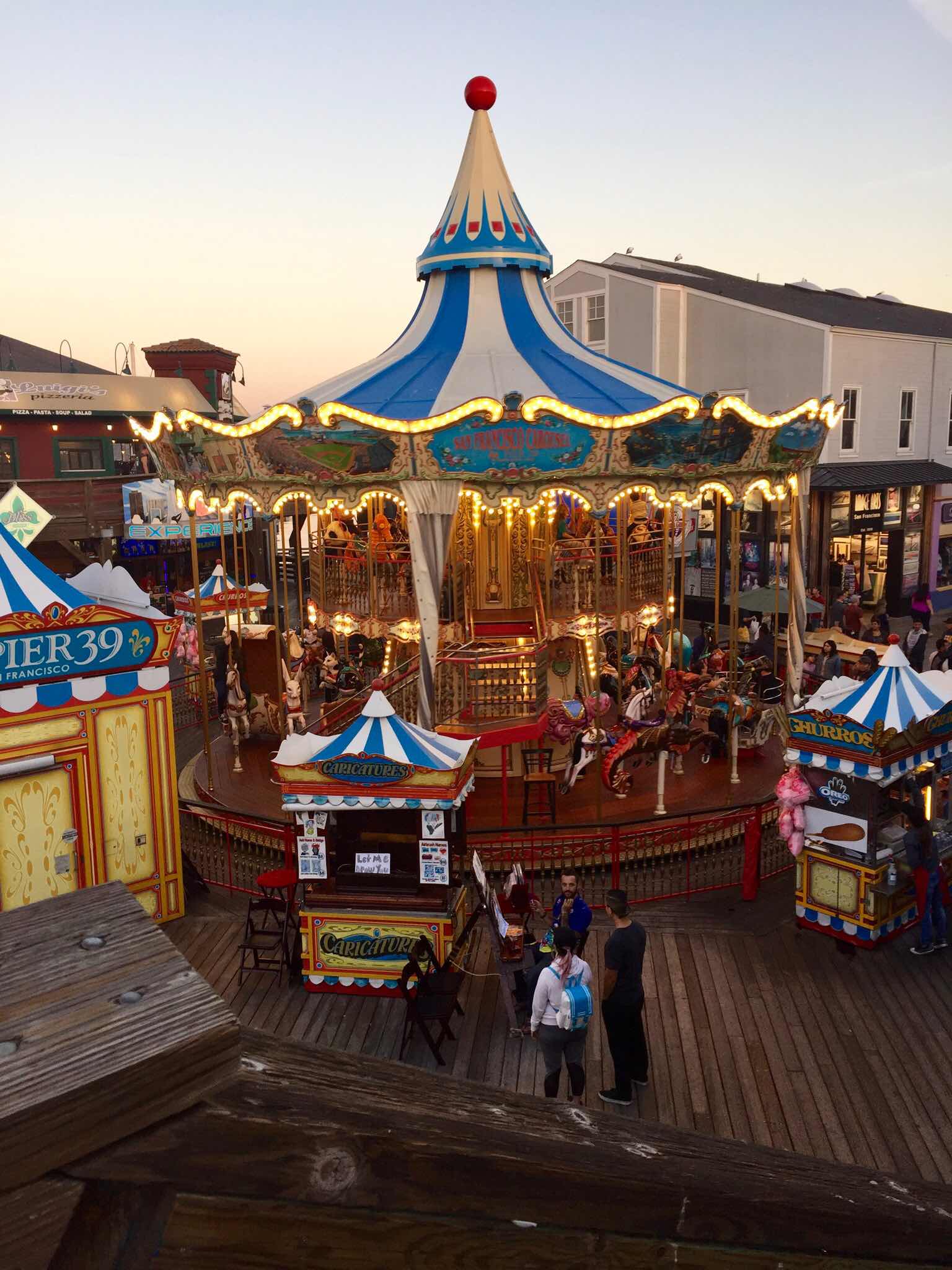 The wharf is the only part of SF where I felt like I could stand up straight.

Everywhere else is on such a steep incline, I kept leaning to one side.

Say what you want about tourist traps, I fell right into all of them.

I kept thinking to myself, this could be Vancouver, the air is similar, the boats, the people...

And then it appeared in front of me 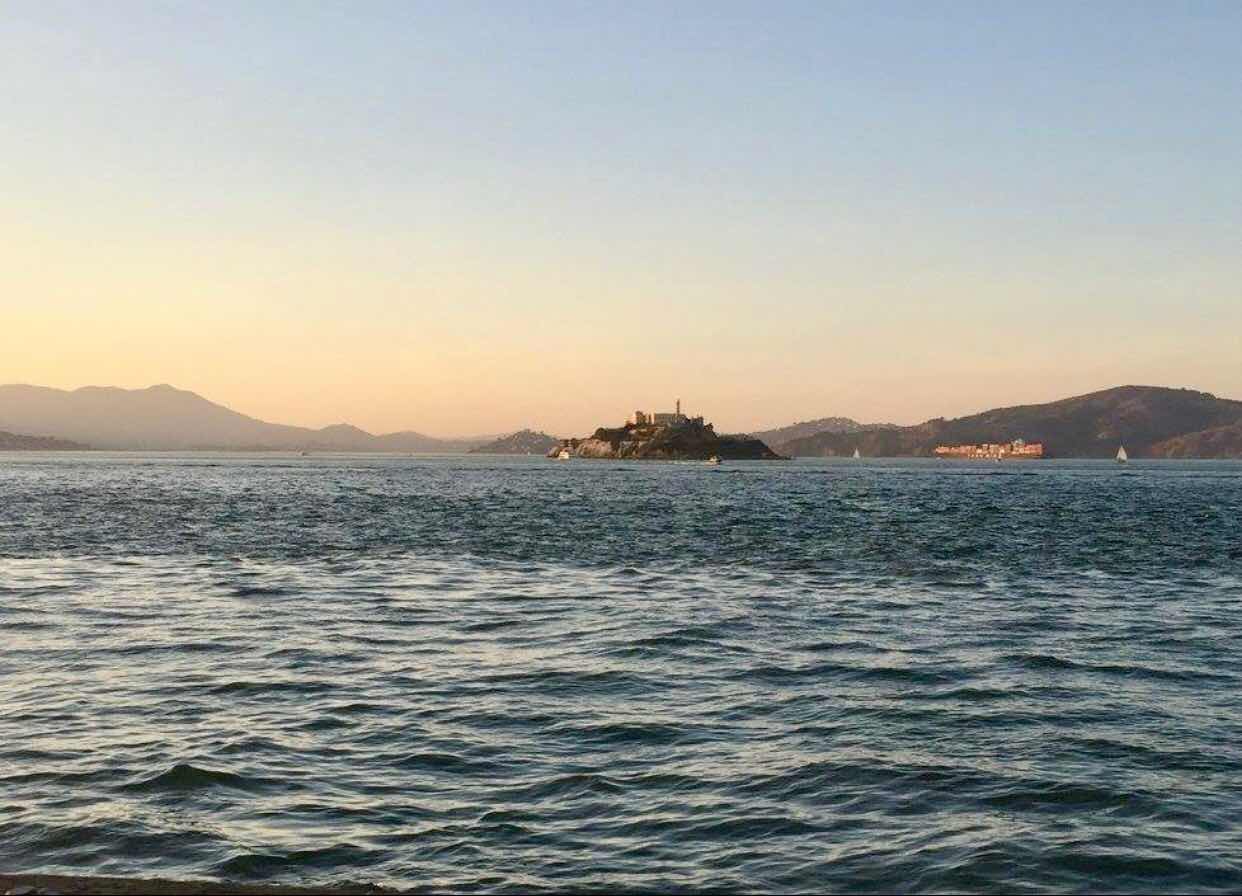 I stood at the edge of pier, mesmerized.

In 24 hours, I was going to be exploring Alcatraz prison.

There is something to be said about living out a childhood dream.

Mine was going to Alcatraz. And creating something that holds a place in pop culture.

Still working on the latter.

I watched the sunset over the bay.

I ate clam chowder, took a million photos and listened to the talented musicians playing in the background as I wandered around.

I felt touristy and alive and in the moment.

Being out of my comfort zone wasn’t so bad after all.

I eventually made my way back to the cable cars, standing in line beside the platform where they turn the cars around on the track.

A man playing the guitar was singing Sweet Caroline and everyone in line joined in during the chorus.

The kids in front of me sang so loud that I started to laugh.

This time I rode on the outside of the cable car, sitting on the bench holding on to the stripper pole.

It was dark, the trolley chugging up the hill and careening down the other side. Those hills seem a lot steeper at night.

I could see the funky houses with their bay windows, not an empty parking space in sight.

I had to remember where to hop off.

“ Watch out for passing cars,” the conductor said as I was about to exit.

I stopped in at the Walgreens on the corner to buy some snacks and water for my mini-fridge.

Back in my hotel suite, I flopped on the bed, with its 8 pillows—loved that pillow menu, and turned on the TV.

The hotel didn’t have a/c but my room came with a ceiling fan and I would keep that thing on for the entire trip.

I wrote in my journal

And a bunch of other ramblings.

But childlike enthusiasm is healthy. Keeps the heart young, yes?