Won’t you save me San Francisco Part 3 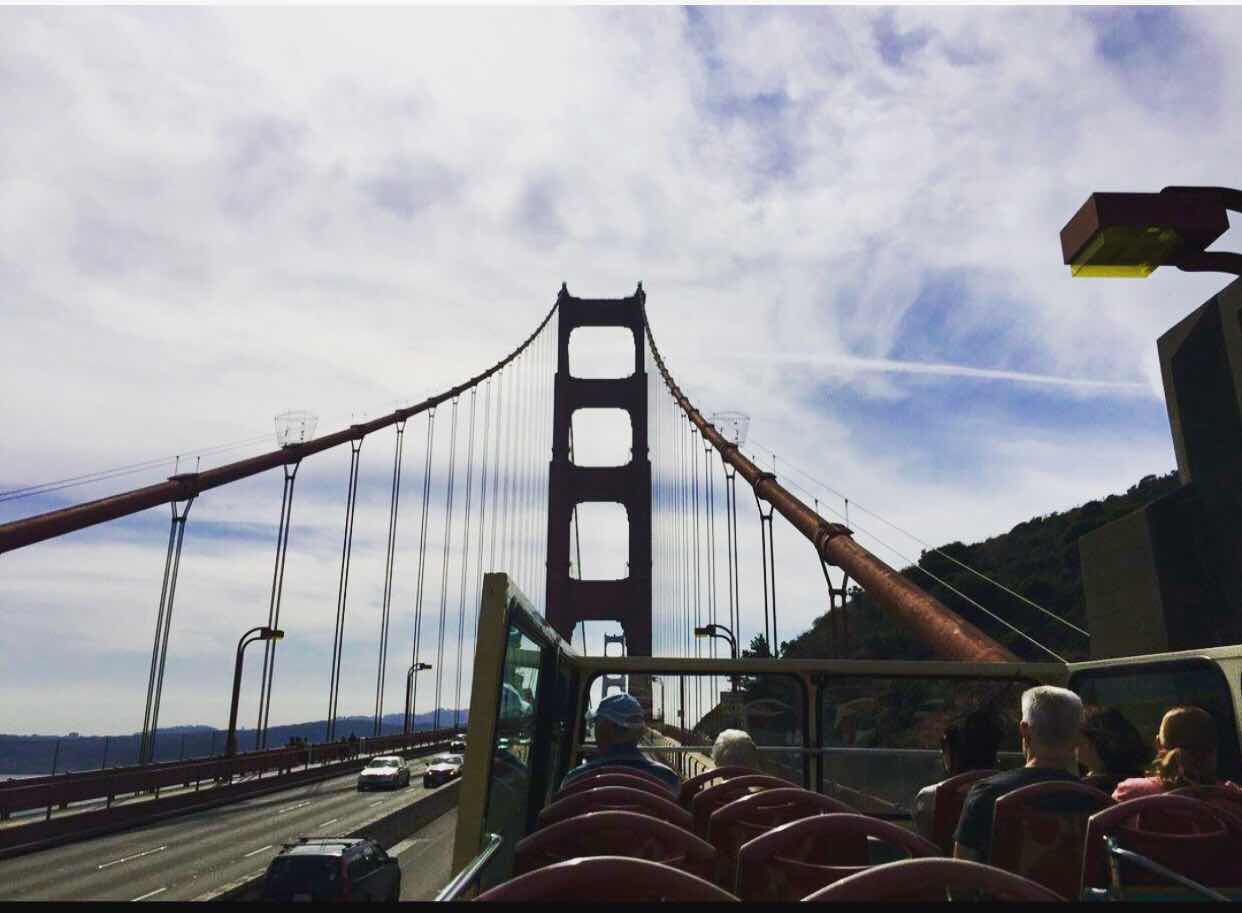 Golden Gate Bridge just before the famous fog rolled in

I woke up in my lovely hotel suite on Union Square, the mountain of pillows had fallen to the floor.

I felt a bit guilty so I actually made my bed so housekeeping wouldn’t have to.

I ate a leisurely breakfast of seafood eggs benedict in the hotel restaurant and planned out my day with the concierge, who was shocked that I was traveling alone. And that I was Canadian.

I purchased a two-day pass for the Hop on hop off tours, which included a night tour and a trip to Sausalito.

I set aside my fear of heights and rode on the upper deck of the open-top double-decker bus.

The driver must have been in a hurry because he sped through San Francisco like he was outrunning the apocalypse.

It turns out that I boarded the bus at the halfway point so I got off and joined a new bus and started the tour over again at a much more reasonable pace.

The wildfires were still burning around California so the air was a blend of smoke, fresh baking, and sea. It was a sunny day with blue sky, but when I look at my photos, I see the haze.

The bus drove over the Golden Gate Bridge, the first time I was too nervous to take a photo so I hung on to my seat with both hands.

I took the moment to really look at my surroundings.

The iconic bridge that I recognized from TV and movies surrounded me. Vehicles whizzing passed, some people waving out their windows at us.  To my right, Alcatraz Island

To my left, well it was more water. To be honest, Alcatraz pretty much had my full attention.

The ride back over the bridge was more relaxed. I could take photos without feeling as though I was going to fall off the side of the bus.

Mid-afternoon, I got back to my hotel for a quick outfit change and then walked downhill to catch the F Line historic streetcar which took me to Pier 33-the Alcatraz cruise. 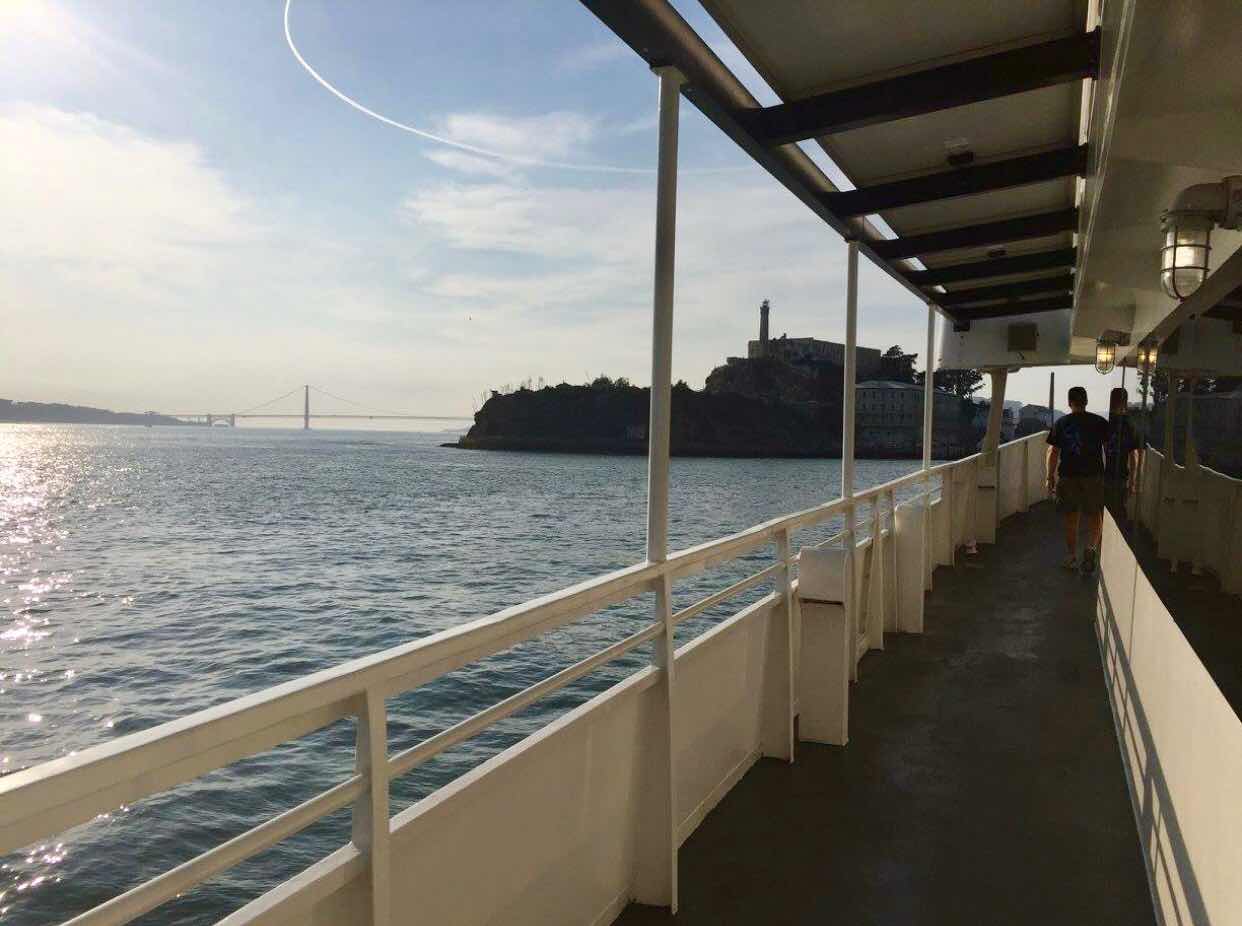 
I had a ticket for the behind the scenes tour of Alcatraz. It was more expensive than the day tour and the night tour but I figured it was worth it.

I was not touring SF on a tight budget.

Only 30 tickets were issued for this particular day so it was a very roomy cruise across the bay to the island.

The ferry pulled up to the dock--the crowd of people lining up to leave a place that was designed to prevent prisoners from escaping was an ironic image.

For the next 4 hours, I experienced Alcatraz.

I spent five minutes in solitary. I went up the tiers of the D block, sat in the tiny cells, peering through the rusty bars while my heart pounded.

Restorations have been done to allow tourists to go inside certain cells if they bought a behind the scenes pass.

The walkways were so narrow and the top tier was beyond my height comfort zone but I made myself go up-hence the rapid heartbeat. 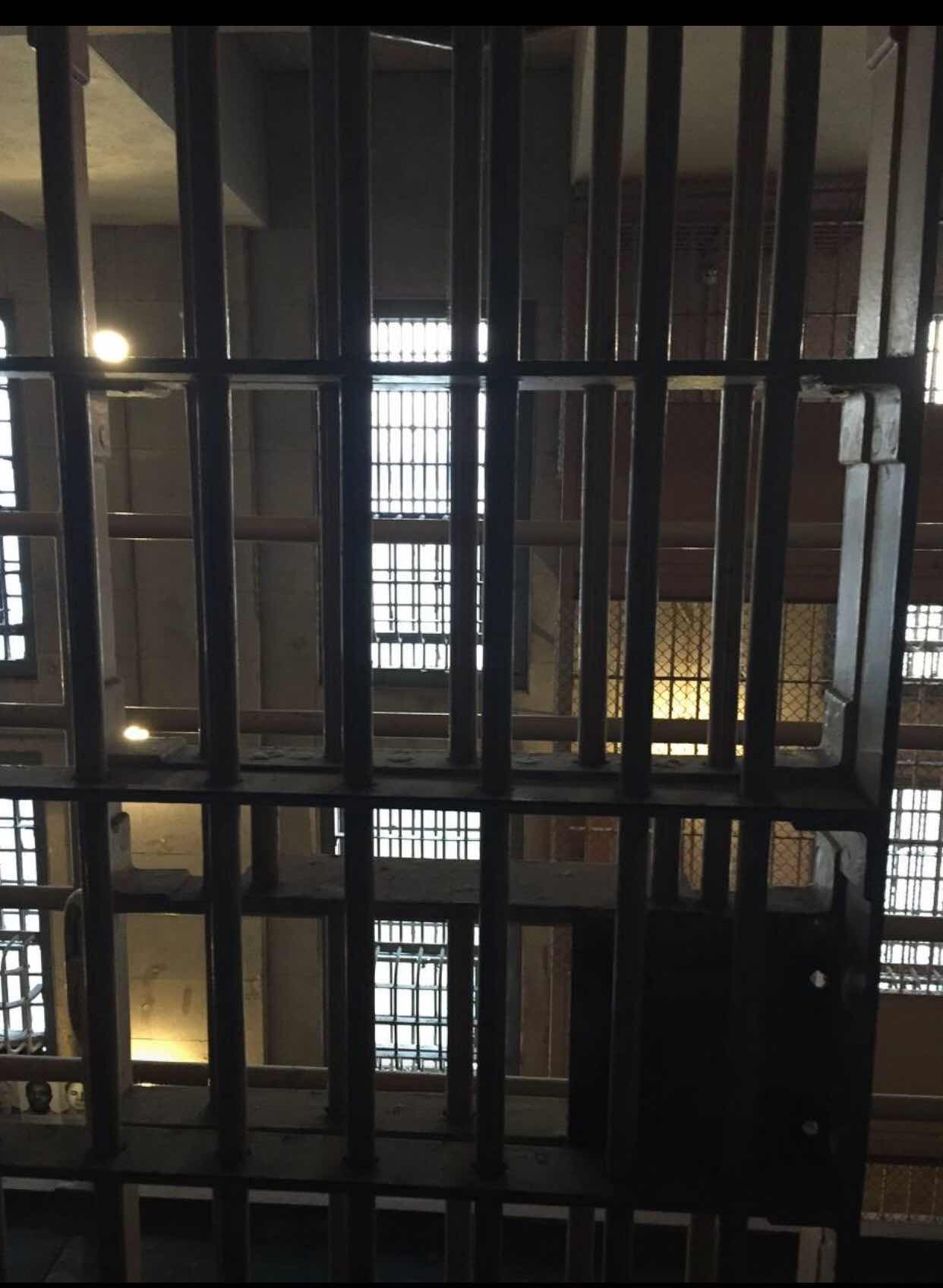 Sitting in a cell on D block

Walking the cell blocks, listening to audio recordings of actual prisoners and guards tell of their stories added to the eeriness.

About two hours in, I had to go sit outside for a moment. I sat on a bench, admiring the San Francisco night skyline across the bay and went on Facebook to bring myself back to present day.

The recreation yard and another cellblock were closed off for restoration and the hospital wing had been closed for a few years already.

Something very creepy about the hospital wing-I would have loved to walk through that.

The damage from the riots, the tunnels beneath the main prison where we got to spend about 15 minutes before oxygen levels got too low, the ruins of the Warden’s house and social hall, the graffiti from the Occupation of Alcatraz.

Even the apartments that were decaying so badly that you could only peer in through the windows.

All of it had such an eerie charm that took my breath away.

I was wandering through a place of hell for some people and also a place where people worked and raised families.

I didn’t realize that families lived on Alcatraz Island while the prison was in operation.

The other interesting thing was that while it’s said that Alcatraz was home to the worst of the worst, that wasn’t necessarily true.

The Charles Mansons and Paul Bernardos were not housed there. Sure, Al Capone was a prisoner there but he was so ill with syphilis that he spent more time in the hospital wing than in his own cell.

It was the trouble makers that got sent to Alcatraz, the ones who wouldn’t obey prison rules.

4 hours in Alcatraz was enough to keep me in line.

I finished the prison tour, bought a bunch of gifts for my brother and nephews-the prisoner harmonica and guard whistle were a big hit with the kids but not with my brother.😂  I did get him an inmate conduct pad so that he would write up official reports on his kids for good or bad behavior.

It was late when I boarded the ferry back to the city. This time it was packed with people. 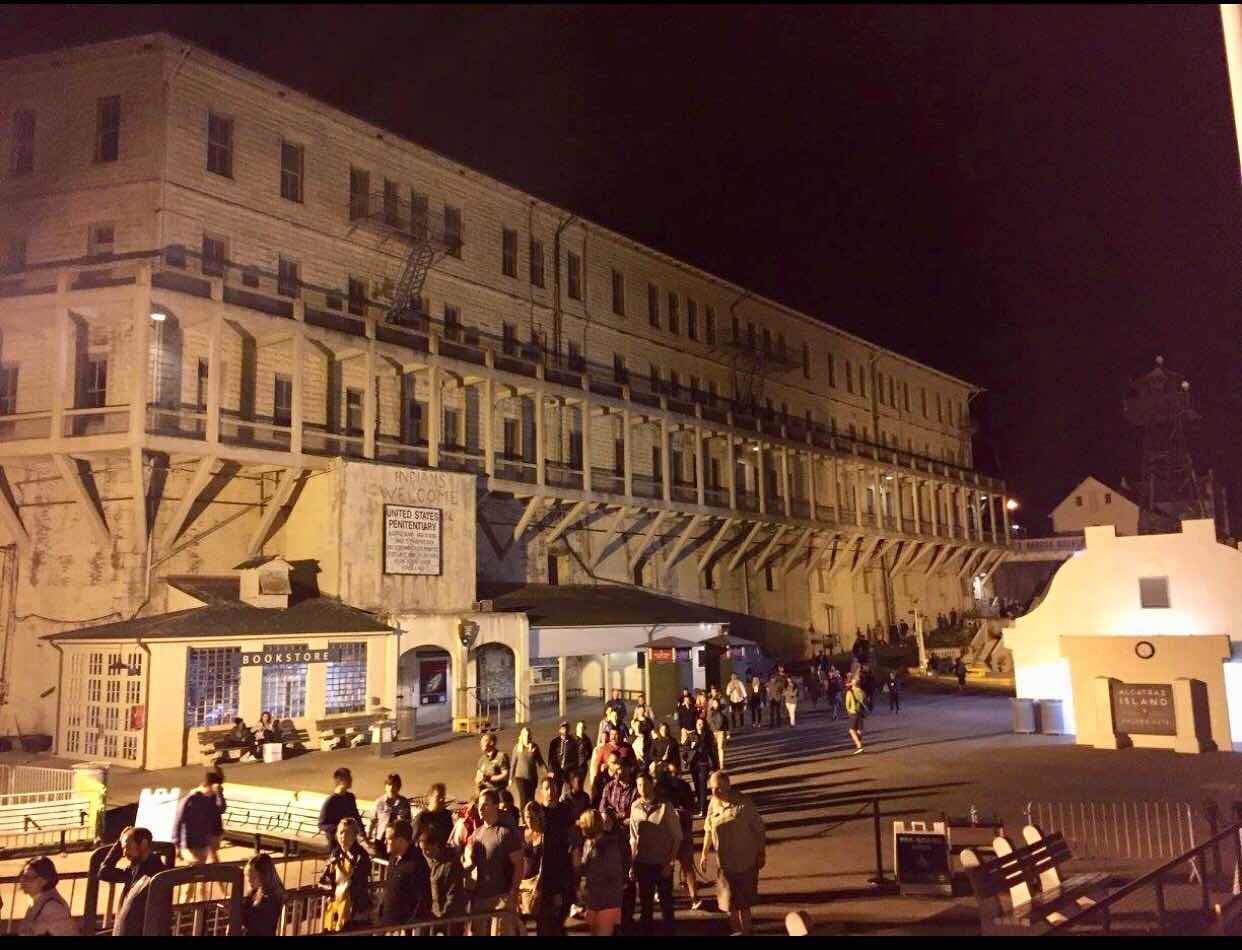 I felt a bit sad to say goodbye, which sounds odd but this had been a big moment for me.

Travelling has never been a must for me, outside of my road trips, but Alcatraz was somewhere I had wanted to visit since I was a young girl.

And now I had taken myself there. To me, it was special.

Back on San Francisco soil, I walked along the Embarcadero, stopping in at Boudin’s bakery for a sourdough sandwich and missing my old bakery job.

The air was calm, tourists were out enjoying the warm fall night, which was 20 degrees warmer than fall nights where I live.

I hopped on the cable car, which was basically empty and rode the hills back to my hotel.

I opened a bottle of complimentary Cabernet, ate my sandwich and recapped the day’s events in my journal.

Now that I had completed the one thing on my bucket list, it was time to add another.